Can it be that simple? Just getting more oxygen helps the immune system. 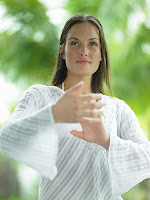 SHANGHAI: The stress of modern living had prompted many around the world to learn qigong. Recent joint studies from China and the United States also show that qigong can help cancer patients live longer.

One community club in Shanghai is practicing a form of qigong that has helped members recover from life-threatening illnesses over the past 20 years.

Cancer survivor Qiu Jia Ming, 65, who suffered from pancreatic cancer years ago, said: "I was diagnosed with pancreatic cancer when I was 50 years old and the doctor told me I only had three months to live. But I've survived 14 years now."

"I'm 57 and have been practising qigong for 22 years. I was diagnosed with nasal malignant granulomatosis, a very rare cancer, and doctors said I only had six months to a year to live at the most.

"So when I was discharged from hospital, I didn't go home. I went to join the Guolin Qigong Club. Doctors said it was a miracle that I survived beyond a year," said Yin.

Even the head of the cancer rehabilitation club is convinced of the benefits of qigong against cancer. Yuan Zheng Ping was diagnosed with malignant lymphoma 28 years ago and after studying Guolin qigong in Beijing, he started the Shanghai Cancer Rehabilitation Club in 1989 to teach others like him.

"It's not only a physical exercise, it is also a psychological practice of breathing using rhythmic exercises, thereby taking in a lot of oxygen. This is beneficial because it increases immunity and help fight the cancer.

"We did a survey in 1993 with 1,500 cancer patients and discovered that after five years of practising Goulin qigong, there was about 85 per cent recovery rate. In 2003, we did another comprehensive study and found that out of 7,000 cancer sufferers, more than 60 per cent of them survived for more than five years," said Yuan.

With such high success rate, there is now more attention paid to this form of exercise. Initial results from studies conducted by the University of Illinois and Shanghai University of Sports show that practising Cailin qigong can help cancer patients live longer and give them a better quality of life.

Wang Changwei is the researcher behind a new study program sponsored by the US-based National Cancer Institute. Her first phase of research centred on those who regularly practice qigong and it showed that this group of practitioners have a lower rate of cancer recurrence than others.

She said: "From our current study, regardless of quality of life, exercise ability or health conditions, those who practised Guolin qigong are far better off than those who don't exercise qigong.

"We did an 11-month observation and found that oxygen intake of those who practise Guolin qigong was higher and when they are at rest, the oxygen level is the same. This means that they inhale more oxygen during their practice. Their breathing method of inhaling twice and exhaling once helped to improve their oxygen intake."

Even doctors who specialise in Western medicine believe there are benefits to practising qigong. But they said there may be other causes that are helping cancer patients recover from their illnesses.

Gao Yong, a doctor at Shanghai East Hospital, said: "Qigong can help patients forget the pain of the disease. Also, the exercise is a team activity. Practitioners encourage and support each other. There is more confidence when they see others recover. I think this is the real benefit of qigong.

"The study has only just started about two or three years ago. A large scale study is needed and should take about three to five years, or even longer, for a more detailed observation of the benefits."

China sees about 2.2 million cancer cases yearly, with one in five dying from the disease.