Two Qigong Exercises for my students.

This exercise is to be done with very little tension and no locked joints. Please check with your health provider before trying these exercises to ascertain if they are appropriate for you.

OPENING AND CLOSING WINGS LIKE A DOVE
Posture Checklist
1. Hold a 'balloon' in front just above the navel.
2. Shoulders always sinking down to the hip joint, elbows slightly lower than hands.
3. Feet under hips pointing straight ahead
4. Slight bend in the knees
5. "Sitting on an invisible high chair"
6. Lift from the crown ( back of the head) and slight tilt to the pelvis to drop the tailbone.
Active Movement:
1. Breathe in and expand the balloon, until the arms and shoulders RELAX and fall back and down,
2. Feel the scapulae roll inward to meet each other. Breathe out slowly while relaxing this move.
3. Start to breathe in again slowly as you let the (still softly curved) arms come back to hold the balloon in beginning posture.
4. Breathe out as you press the balloon into your body and relax the shoulders and chest again and allow the chest to slightly sink inwards.
Repeat slowly 4 or 5 times taking rests frequently and shake out gently if you feel tension.

PRESS DOWN BEHIND THE NECK AND LIFT TO HOLD UP THE SKY
Posture same as first exercise, Breathe as necessary do not hold your breath.
Active Movement:
1. Hold balloon under the navel fingertips almost touching palms facing up.
2. Raise the arms up overhead in this postition, palms facing the head, arms curved (like a ballet pose)
3. Press the palms down behind the head to the shoulders near the neck.
4. Turn the palms facing up, straighten the arms about 80% and hold up the sky, elbows stay bent, try to drop the shoulders and breathe out here.
5. Pull the fingers straight up lifting the hands and bring them back to back, elbows still bent.
6. Imagine parting the curtains to shoulder width with the fingers, and then drop the shoulders, then the elbows and the fingers will slide down the curtains on either side of your body, right down to the floor.
7. Relax the arms, shoulders completely and then softly curve the arms in front to hold the balloon again as in beginning movement.
Repeat slowly 4 or 5 times taking rests frequently and shake out gently if you feel tension.
No comments: 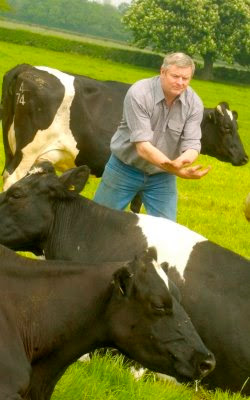 By Emily Allen
No comments: